An impossible draft, be careful if you proceed reading!

Some thought on Evolution of home sapiens information processing?
It seems we are gradually coming back to the future in our thinking, while using the idea of biological evolution and slowly (but fast in an evolutionary perspective) move into a cultural evolution of man created by primates which “human brain” is based on and further developed.

Considering the evolution of homo sapiens brain (last c 300.000 y) based on Primate development during some 5 million of years based on evolution of evolution of mammalian (Limbic) brain during c 150 million y (based on vertebrate …), where verbal code (see Paivio), what we call rational thinking and homo sapiens consciousness is slowly gradually approaching the present (very variating) position. In other words, if we consider the evolution of the past parts where Limbic systems (evolved during hundreds of millions years) gradually is “gradually creating” last 5 million of years the primate brain and then last 300.000 years we may see this is a gradually step by step “building creation” where one code systems slowly becomes a two (very different) doing systems (much work here by Paul MacLean & Allan Paivio, 19??), we can assume (as Consciousness as a Memory system), the evolution of verbal code development – time perspective – consciousness – … is an intertwined selection process where cultural evolution gradually emerge … 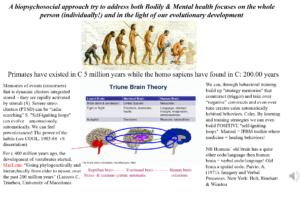 The above propose that “human will” is not what juridic people believe, but a mixture of conscious (parts of “human” brain) and not conscious (Limbic spatial elaborating processes) behaviors, more clearly (but not clear) during irrational dreams, but when we are (believing we) awaken we just am conscious what is “available” in the comprehensive spatial-verbal mixture of dual code information processing where also reconsolidation increase the complexity – gradually changing the platform for “working/elaborating/behaving” Limbic memory!

The above highlight a huge problem for many disciplines, while still Alpha males (and fewer females?) run the world, which include survival of (often suffering) individuals in war, hunger, catastrophic influence on environments … you name it! Many ideas around, e.g. https://www.theguardian.com/science/brain-flapping/2016/oct/10/do-alpha-males-even-exist-donald-trump (where Trump can be regarded as the inner enemy of democracy and Putin of … you name it!)

More text will come – if the forces is with us!

Some links
Impossible possibility, possible impossibility or normal state? Tunneling at Nano level? | Quantum Medicine
Toward development of a guide facilitating knowledge and practice-based use of human Limbic systems information processing in general and health care services in particular | Cultural Medicine and its sub pages
Paradigm | Biopsychosocial Medicine
To SEE or not to SEE makes a diference? | Quantum Medicine